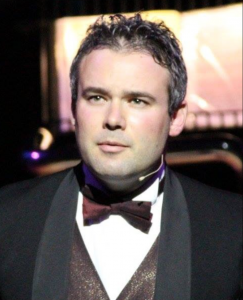 Russ, tenor is a stunning opera singer and a outlandishly funny performer with his BMus and MMus at the Guildhall School of Music and Drama in voice on an unconditional place where he studdied with Ian Kennedy. After leaving college Russell has made his mark as a popular tenor performing for events throughout the UK and Europe. His tenor opera credits include Tamino (The Magic Flute), Title role in Albert Herring, Pedrillo (The Abduction from the Seraglio), Don Basillio (The Marriage of Figaro), Don Jose (Carmen), Count Almaviva (The Barber of Seville) Gaston (La Traviata) and the second brother in the world premiere of Laurence Roman’s Isabella and the Pot of Basil at Covent Garden and Buxton. Choral works include Handel’s Messiah, Haydn’s Creation, Nelson Mass & The Seasons, Charpentier’s Messe De Minuit & Te Deum, Gounod’s Messe Solennelle,Haazen’s Missa Luba, Mozart’s Requiem, Vesperae Solennes & Coronation Mass, Rossini’s Petite Messe, Stainer’s Crucifixion,Beethoven’s Choral Symphony, Britten’s St Nicholas, Orff’s Carmina Burana and numerous Bach cantatas and passions singing the role of the Evangelist. 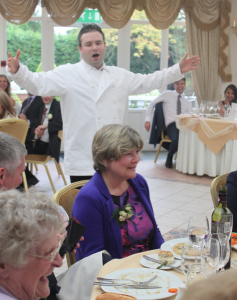 Russell has a very keen interest in the works of Gilbert and Sullivan, going so far as to write his Masters thesis on their life and music. He has performed many of the principal tenor roles across the Savoy opera range including The Defendant, Marco, Frederic, Hilarion, Ralph, Captain Fitzbattleaxe, Richard Dauntless, Earl Tolloller, Duke, Alexis, Nanki-Poo and Box, only three left! Recently Russell has been accepted to sing principal tenor in the world renowned “Grims Dyke Opera Company”. His recital work is also recognized in other fields of English music, most recently song settings of the poetry of Housman in “The Blue Remembered Hills” for the Worcester festival. 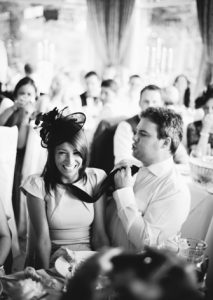 Not only happy in operatic roles, Russell is also a keen concert recitalist and after dinner entertainer, having performed seven times with his Young Proms colleagues in the West Midlands area, and having raised over £100,000 for numerous local and national charities. Further afield Russell also works for the London agency Hartley Voices with its group AKA Opera providing unaccompanied opera classics for after dinner and wedding entertainment.

Russell is also very proud to have a strong group of private students for both vocal and music theory tuition, with many students reaching Grade 8 and even beyond to Diploma level.

When wanting warmer climes, Russell spends most summers performing in the south of France, ranging from full scale operas, to concerts in converted barns.

Russell is also a fellow of the London College of Music (FLCM).

Fiona my wife was blown away. I had 3 ladies ask me to arrange their birthdays for them. Words like 'Out of this world', 'Wonderful'! I would recommend this duo to anyone holding a party.

"We all want to say that your performance was simply fantastic & outshone any expectations I personally had. Learning & performing those extra requests was so very appreciated. Hopefully you might add them to your repertoire as you preformed so well. Thank you so so much. I’m sure you hear it all the time but you truly made the wedding even more memorable & will be talked about for many years to come. Again a truly heartfelt Thank you!"

"Thank you very much. Everything positive. Great voice, good repertoire, nice sense of humour, really engaged everyone. So pleased you connected with Lyndon (15 year old great nephew). Life is not easy for him and he was so happy yesterday. It was a very good day for Linda and John and everyone there. Lots of positive messages. Thank you."

“I want to say a very big Thanks to you all, for your wonderful performance at my husband’s birthday luncheon. Like the song you performed’ Some Enchanted Evening’ – it was an’ Enchanted Afternoon’ of beautiful voices, songs and music, bringing much happiness and ‘tears of joy’ to our guests. You enhanced our afternoon, you were the icing on the cake, you made the day. On behalf of my husband, and all our guests, thank you so very much. Kind regards and best wishes to you all”